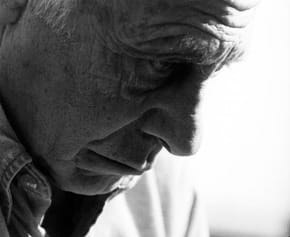 A solo cellist begins with a melancholy, yet insistent soliloquy. As the string orchestra behind her joins in, an image suddenly appears on screen. In the middle of a deserted concert stage, laid out exactly as for the concerto, we see an elderly woman, scribbling coded messages on sheets of paper.

Part cello concerto, part film opera, Michel van der Aa’s Up-close explores the human condition through reflected and overlapping sounds, images and plotlines. The actions of the woman and the cellist come closer and closer until at the end they mimic one another, without ever completely connecting. Images and music leak from screen to stage and back again in a poetic exploration of the rituals of communication.

Themes of virtual reality and plural identities have been present in Van der Aa’s music for ten years. In Up-close he goes even further, folding sound and screen over and over on themselves until certainty slips completely from our grasp.

Dutch composer Michel van der Aa has won the 2013 Grawemeyer Award for Music Composition for his multimedia work Up-close, which offers a unique blend of cello concerto with film. The Grawemeyer Award, granted annually by the University of Louisville, is the world’s most prestigious composition prize, worth $100,000 (EUR78,000). Van der Aa’s Up-Close, premiered […]

The UK’s Gramophone magazine this month made Up-Close its “must see” DVD of the month, describing it as “undoubtedly the most impressive yet” of Disquiet’s four releases so far. “The way these worlds [of film and concert platform] constantly alternate on the way to their climactic superimposition … turns an outwardly abstruse conception into an […]

Hauntingly beautiful
“Written for Argentinian cellist Sol Gabetta, this hauntingly beautiful work is among Van der Aa’s finest. Gabetta, in a print frock, sits among the black-clad orchestra, spinning out a rapturous song without words, while on screen a similarly dressed older woman creeps furtively to a disused house to use an old, unspecified piece of electronic equipment.
Black-out screens cover the windows and the machine communicates in code. The woman may be reliving wartime memories, possibly as a member of the Dutch resistance. But we will never know for certain. Being “up-close” can never give us the bigger picture, and we are left with a mystery that continues to resonate after the music has faded.”
— The Guardian, Tim Ashley

A powerful seeker on a quest for the meaning of life
“Here is no avant-gardist who mercilessly frightens off his audience, no esoteric metaphysician, no gushing neo-Romantic. Instead, here we have a powerful seeker on a quest for the meaning of life who combines austere sounds with a preference for whip cracking rhythms and dense tonal atmosphere.
In Van der Aa’s music, any kind of mood is tersely and grippingly translated into sounds with an underlying, entirely unsentimental sense of melancholy. It is this austere kind of melancholy that can be found, for example, at the beginning of “Up-Close”, when Sol Gabetta plays a solo cadenza, at first tentatively, then frequently interrupted. Again and again the music presses forth from lower tonal areas up into higher registers, culminating in a virtuoso maenad dance that is taken up by Amsterdam Sinfonietta in a furious manner.
The first movement leads into a mysteriously dreamy intermezzo for tape music and video in which the cellist gets into contact with her alter ego on the canvas for the first time. Both seem to be striving for a cross-generational dialogue, not knowing how to begin and how to carry on…

A touching combination of film and live performance, of past and present.”
— Süddeutsche Zeitung, Reinhard Brembeck