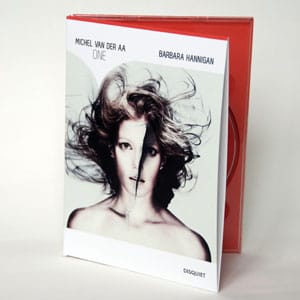 Like an icon she lights up: a woman in the darkness. The rasping sound of the dyno torch at first sounds nostalgic, but out of their familiar context, the flickering light and the droning rhythmic grating become oppressive and ominous. Who is this woman? What is she doing there?

One, a chamber opera by Michel van der Aa, steers the spectator’s attention inexorably into the spiritual word of one character: the ‘one’, sung by soprano Barbara Hannigan. She drowns in the questions which constantly bubble up in her fragmented mind; but there are no answers or solutions. The combination of soundtrack and video makes the axis of time meander between the tangible reality of ‘real-time’ and the ‘captured’ reality on the video screen. Yet One is first and foremost an intimate, poetic and human chamber opera.

Michel van der Aa’s masterly ability to fuse music, text and visual images into an organic whole, combined with Barbara Hannigan’s tongue-twisting virtuosity, have made One into an instant contemporary classic. The production has been performed to wide critical and audience acclaim in twelve countries.

“The strangest, most haunting of the opera DVDs which have come my way this year…It’s baffling, but chilling; and it’s remarkable to witness how brilliantly Hannigan performs alongside her video double. The final minutes, as Hannigan’s elderly self delivers a brief soliloquy, are terrifying.
Van der Aa’s music, punctuated by the crackle of snapping twigs, eloquently melds electronica and acoustic sounds. Watch this in a dark room, late at night and on a laptop, and you’ll have uneasy dreams.”
— The Arts Desk

“An opera which can take its place in that remarkable lineage of dramatic monologues stemming from Schoenberg’s Erwartung.
Total theatre at its most provocative, and a significant instance of where contemporary opera is headed”
— Gramophone

“One is masterly…a wonderfully poetic piece. As enchanting as a dream”
— Het Parool

“Michel van der Aa fascinates in One. The high quality of the notes in a highly concentrated, sublime sharpness and taut beauty, both mechanical and human.“
— NRC Handelsblad