A production of Ensemble Musikfabrik and Disquiet Media 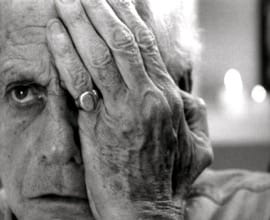 Transit brings together elements of Van der Aa’s 2000 piano composition Just Before with Passage, a short film he made at the New York Film Academy.
In Transit the movements of the pianist interact theatrically with the video projection, the focus shifting between the video projections and the virtuosic playing of the pianist. The film footage shows us an old man trapped in his own house, he is fighting against a loneliness verging on insanity.

Transit is performed with DVD. The electronic soundtrack on the DVD combines actual sound from the film-set with prerecorded and edited piano sounds, resulting in close intermingling of live piano and pre-recorded electronic sound.

“A poignant meditation on the loneliness of old age”
— The Guardian